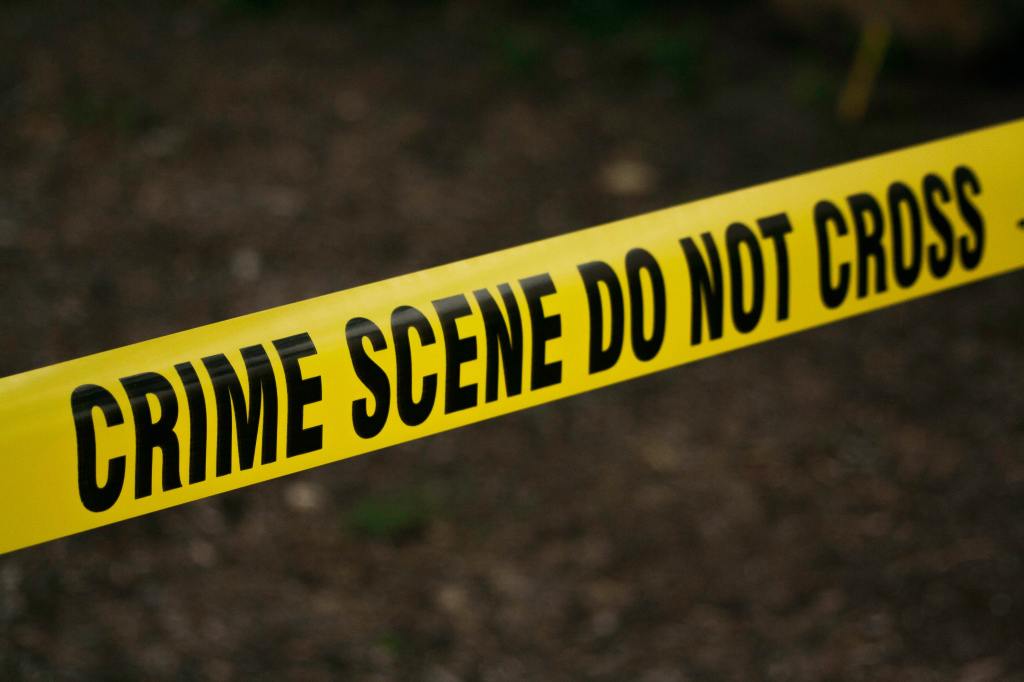 “Will you tell me the truth or I stab you to death right here and now?” Rex whispered into her ears while locking up her neck with his right elbow and pointing the knife towards her heart. Her hands were bound behind, two other fellows who were masked up while keeping watch on both sides of the bungalow.

“And if you shout, you know what will happen to you and nobody will ever get to do anything about it.” Rex continued

“Rex… Rex…” Tessy stammered “this is not you. You shouldn’t be doing this and you wouldn’t want to do this.”

“Listen up young woman” he sneezed and continued “Yes, the quiet, naive Rex you knew was dead. This Rex you are looking at is not your friend. Are you ready to tell me about it or not?”

“You can’t kill me please” she struggled in vain to free herself “I know nothing about it. Uju told me nothing before she travelled, I am as unaware as you are.”

Rex looked at one of the guys, made an eye sign and the young man ran over, sealed up her mouth with black tape and ran back into position to continue keeping watch.

“Dee” Rex called in low tunes, Dee looked back at him “Let Martin start the engine. We are almost good to go” Dee brought out his phone and whispered over. “Now, Tessy… The game is over. I am sorry but I have to do this.” Tessy kept groaning, trying to say something but nothing meaningful because her mouth was sealed up. Without looking, Rex stabbed her into the heart deeply, making sure it wasn’t something she was never going to survive.

“Hey! Don’t forget to bring the knife along. Leave no evidence!” Dee whispered. They ran out of the scene quickly and the sound of a car engine was heard zooming off.

Ike was about killing the big broiler lying in a corner of the kitchen, he wanted to make breakfast for himself and his fiancée. They fought last night and didn’t sleep in the same room. He sensed that Tessy was doing laundry at the backyard, it was something he usually loved to do other than have Tessy do it. On the other hand, Tessy would prefer to do the dishes rather have Ike do them. “Perhaps, this is how we would have to make up this morning” Ike smiled. “Amaka did well to gift Tessy this chicken yesterday”.

Ike had never killed a chicken before but he needed to do this to please Tessy. He had always watched people do it for him but now he was going to be man enough. He would fry a part of it and put others in the chest freezer. While Ike hadn’t done this before, he did well even though at some point he lost control of the dying broiler whose blood splashed across the sink and his clothes. While he was it, he was hearing voices at the back of the corridor which was directly after the kitchen, they were talking in low tunes but he couldn’t hear Tessy’s voice.

At first, Ike taught it was his neighbours but when he heard footsteps running out and the sound of a car that zoomed off, he rushed out of the house with the knife in his hand. He wasn’t with the knife to put up a fight, it was a reflex action as he didn’t know what exactly was going on at the back of his apartment, he was simply furious.

He had run out of the kitchen, ran through the corridor, rushing outside to the backyard to see Tessy lying helplessly with her hands tied and mouth sealed. She was breathing hard and almost struggling to keep up with life.

Ike threw his knife by the side, knelt before Tessy and tore the seal out her mouth. She was trying to say something but she was losing it, she could make any other sound but “Ike… Ike…”

“What happened Tessy… Who did this to you?” Ike was missing heartbeats, if it was a dream, Ike would have preferred it “Talk to me please…” Tessy tried saying something but eventually gave up!

Coincidentally, a neighbour who had walked into the backyard with a bucket in her hand to fetch water “without permission” ran out of the scene for fear. She had gone to tell other neighbours what she had seen and that was the beginning of much more troubles.

Amina saw Ike kneeling before Tessy after they had a long loud fight last night. Amina would remember hearing Ike at night shouting at Tessy and saying “I will do it and nothing will happen!” Does it mean Ike finally did it? Does it mean he went on to carry out his threats?

Everything around was evidence!

There was a knife stained with blood lying by the side, there was blood all over Ike’s cloth and a woman was lying in the pool of her blood just beside Ike. Who would believe that Ike isn’t the murderer?

Just like a wildfire, it had spread around and people had come running into the compound

“Ike! You are a wicked man! Just because of last night’s misunderstanding?” A male voice said from behind slapping Ike down to the floor!

“No… No! I didn’t kill Tessy, how can I kill my own woman? Let me tell…” Ike was trying to defend himself when another hit him from behind.

No one would let Ike say a word!

Before Ike would say “Jack Robison”, stones were been hailed at him, some were hitting him with sticks and they all had their turns to beat him into pulp till his face had gone swollen but one thing he kept saying was “I didn’t… I… I…” Nothing was making sense as his voice had been swallowed in the noise!

“Let’s drag this devil into the streets and burn him alive! We must teach men to stop beating women!” A young man who seemed to have quickly become the ringleader shouted. They all obeyed, another party had quickly carried Tessy to the hospital to see if there was any life left in her while another party had already rushed into Ike’s apartment to loot it and destroy what is left of it.

Back in the street, the mammoth crowd were coming from nowhere to join hands in passing the jungle justice, just as it is called, they all appeared to be acting like animals, running around, carrying sticks, passing the ultimate judgment of death without even giving a listening ear to him.

Amaka was on her way to the office when Amina called

“Amaka” she panted “I have been trying to reach you. There is a very big problem.”

“Why are you panting? Can you calm down and talk to me? What is it about?” Amaka’s voice could be heard over the phone “And what’s all that noise around you? I can even barely hear you.”

“And what about her? Don’t tell me anything happened to her!” Amaka cuts in

“I wish something merely happened… Amaka, Tessy is dead! Ike killed her this morning after they fought last night shortly after you had left the house…” While Amina was still speaking, she noticed a break “Hello… Hello… Amaka, are you there?” All she had in response was the network tone indicating Amaka had hung up.

A few minutes later, Amaka had swerved into the compound, she would see flames going up down the street and would see Ike’s house in shambles. The windows had been broken and the doors thorn down. Some folks had used black spray paint to write on the wall of the bungalow apartment “a murderer once lived here…”

The building has been sealed off with the presence of some policemen from the Nigerian Police force before she arrived. Sitting right inside her car and looking into the scene, she broke down and started crying. She got hold of herself, took a deep breath, wiped her face with a wipe and alighted from the car walking towards the building.

“Hey! Ma’am, you understand that this is a crime scene and has been sealed for investigation purposes? I am sorry but you need to leave the scene right now.” The officer politely told her.

She turned around to see few reporters on the scene making reports and she heard one of the reporters say “few meters away from here, the alleged victim’s murderer has gone up in flames after he faced a terrible jungle justice. We will be showing you live updates from both crime scenes. The Police has assured…”

She could hear another reporter saying “Mr Ike reportedly stabbed his fiancee at the backyard of his apartment. According to an eye witness report who chose to be anonymous, she saw Mr Ike stab Tessy, resulting in bloodstains all over him. She raised an alarm after she saw him throw the knife full of blood by the side…”

“Officer. I am related to the victims and I am Amaka Okokonwo, a private detective working with the Downtown Investigators Agency.” She brought out her ID and was given a pass into the house. There were few other investigators on the scene.

When Amaka walked into the kitchen area, she saw a dead broiler that has been thrown into a corner by the looters, there were also traces of blood around the sink area, the water heater had been turned off but the heat indicator still showed that the water was hot.

What Amaka couldn’t find was the knife used in killing the broiler. “This is just more complicated than we ever thought… Some arrests have been made but I tell you, I am scared we may never get to know the truth.” A voice said from behind, it was another investigator talking to her. They had worked together before.

Like her colleague rightly said, the truth never came out but not possibly forever. The hospital where Tessy was taken to had confirmed her dead.

The spray art remained on the wall for some time reading: “a murderer once lived here…” Every day, as Amaka drive past the scene to her office, she would read this aloud to herself and say “Ike, Tessy knew you never killed her. I know you can’t. There is something more to this. Murderers once came here.”

One fine evening, Amaka was on her way back from office. She stopped by the building, walked gracefully into the compound with spray paint in her right hands. When she reached the wall, she crossed over the writing with the spray to make it unreadable and she made a new inscription on top of it which reads: “murderers once came here…” Almost immediately, her phone rang.

“Hello… This is Amaka Okonwko from Downtown Investigators Agency. How may I help you?”

“We are calling from the Area Command Headquarters” the voice paused “We have a job for you involving one Mr Rex regarding a new crime where one Mrs Uju has been murdered. You may want to drive to the DPO’s office to get more details.”

“Right away” Amaka looked back at the wall, smiled to herself and started walking back into her car.

Purely a work of fiction.