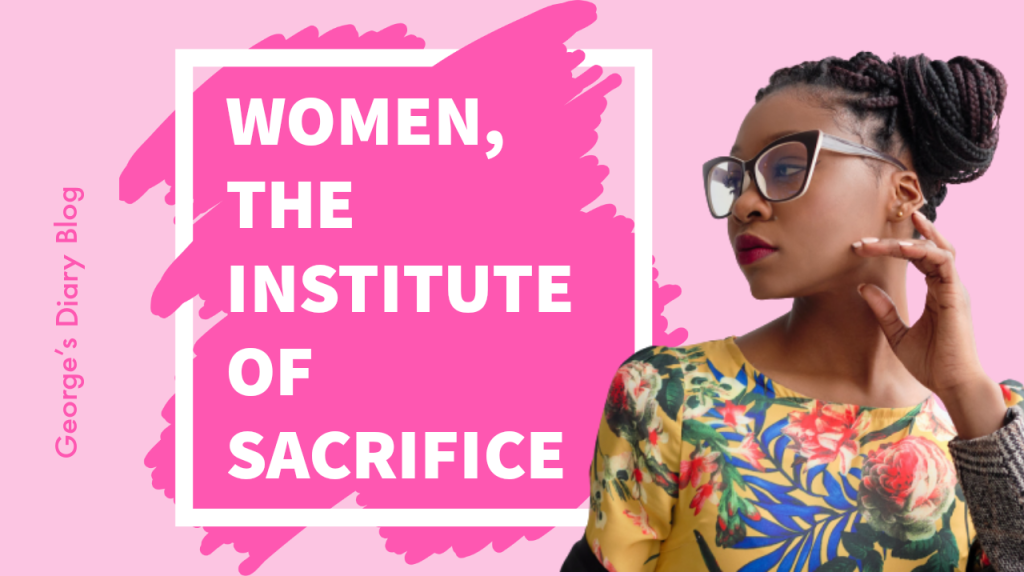 Stephen (Dr Miki) made a Facebook post some time ago about compromise in relationships and marriage as an ingredient to making it work. It inspired these thoughts of mine about women as the ones who have gained more mastery in the art of compromise and sacrifices for the sake of relationship or marriage especially.

My opinion is based on not just my personal experience with women but with some practical things that we see every day.

God designed the human gender in such a unique way that majority of both are not the same in character but when the characters of both genders are fused together, the true expression of humanity is seen. While this isn’t my aim of writing this, let’s dwell in it a little.

The man and the woman together make up the true expression of humanity. You can’t have a full grasp of what humanity is when your understanding of humanity is only based on your experience of the male gender alone or the female gender.

Naturally, most men would prefer to provide for their wives. In fact, when a man isn’t making efforts to provide for his wife, it is a sign that his heart isn’t with her anymore or he has been rewired mentally.

The man’s natural disposition is that of pride, not necessarily a harmful pride. Women too have their own way of expressing pride but let’s talk briefly about the men. Men take pride in making their wives look good and comfortable, they delight in coming home with surprises for their lovers. They aren’t doing this because the woman can’t fend for herself, it is rather their own way of saying “I care”.

These are the natural traits of most men except they start learning otherwise. For example, Tigers are naturally wild but that doesn’t mean they can’t be domesticated. In the same way, a man whose natural disposition towards the female gender especially his lover isn’t that of generosity, he has retrained himself and learnt otherwise.

Even in the animal kingdom, there are lots of animals whose males naturally protect and care for the female counterpart. This is the natural thing to do.

In making relationships and marriages work, women are usually the ones who have gained expertise or ability to reach certain compromises. The more a man is willing to reciprocate this, the more it is easier for the woman though.

The ability of women to endure and make sacrifices in relationships and marriages are unmatched. Psychology, stereotypes and societal demands seem to have made them evolve powerfully well in this aspect. Being a woman alone is sacrifice, the woman bleeds every month at least for a major part of her life just because she is a woman. Without being told, a woman is trained by nature to see sacrifice as normal.

I believe it is this part of the women that the society has abused for long. Because the women seem to be good in it, it has been termed their responsibility and of course, it is not supposed to be so. The more we see it as the woman’s sole responsibility to make a relationship or marriage to work, the more we abuse their strength and make it difficult for them to be willing to do their parts.

When one person is putting all the efforts, it is usually frustrating but when the two are putting efforts with respect to their abilities, there is mutual satisfaction. The same can be said of men when they are the only ones who provides for the family and when it has been termed their sole responsibility.

We have developed a culture that says “it is the man’s sole responsibility to provide for the family” and this is as a result of the abuse of men’s area of strength. It makes it frustrating too especially for those who truly need a helping hand. That someone is good in something doesn’t make it his or her sole responsibility.

Back to the topic.

When talking about making compromises, it is the woman who wears the engagement ring! She shows the whole world that she is taken and unavailable but the man is still a free bird until the wedding. Not sure who made these rules though.

It is the woman who forfeits her father’s name to start answering the surname of her husband. Although this isn’t the case 100% anymore, it is still largely the case.

In most cases, it is the woman who forfeits her loyalty to a denomination, sect or religious organisation and switches to that of her husband. How about moving after marriage? The woman usually moves from her base to join her husband.

While the husband can live out his career fully without a break, the woman will always have obstructions and limitations. Some of these limitations could be marriage and pregnancy.

These things are mostly compulsory compromise that women have to make. Now you see, the woman herself is the institution of sacrifice. Naturally, she is wired and engineered to be more powerful in this regard. So when people think “men are more powerful than women”, they should think again.

Certain people believe that marriage did well when there was less awareness of feminism than now but I think it’s debatable and subject to facts. Maybe, there was less separation but not necessarily more fulfilling marriages.

Some people stayed because they didn’t want to be mocked by society but their heart left the marriage. I have seen a marriage where one partner was praying for the death of the other so that she could be free.

In fact, I counselled someone who said she has been praying for her husband to die so that she can have peace of mind and move on but I said to her “it is better to leave that marriage and ignore the public than pray for his death just so that the public can find reasons with you”.

Marriages in the past weren’t necessarily better, people just had less option. While they didn’t separate, their hearts weren’t together anymore. I wrote this just to say that feminism has not contributed to failed marriages, at least not the true feminism defined in the English dictionaries. Most times, marriages fail because the two has absolutely lost interest in making it work. To understand this, check my article titled “Emotional Divorce”.

Still, on the sacrificial nature of women, even the toughest feminists in most cases are softhearted and willing to compromise for the ones they love. Now, I am not talking about women who are prejudiced against men, they are not feminists and we must learn to stop confusing feminism with misandry.

For the records, feminism stands for equal respect and opportunities regardless of gender. It is about respecting women too.

On the surface of the movement, a feminist may not admit her willingness to compromise, she is doing this for the culture and it is understandable. For example,  a feminist in Nigeria may be against the practice of bride price only on paper because in her views “it undermines the women”.

However, when she finds that man she loves who also reciprocates loves and respect, she will always be willing to subject herself to the demands of tradition just to fulfil all righteousness and be with the man of her dreams.

Does it make her opinions about bride price invalid? Not at all! It simply shows her official stand in an ongoing conversation.

Another example is a woman who believes men should know how to cook but eventually finds love in a man who doesn’t do well in the kitchen. She may be willing to play the kitchen roles all her life but that doesn’t invalidate her stand or even make her hypocritical. It only shows a woman who was willing to compromise.

Being that I am a feminist, many female feminists are very comfortable around me and this has given me the opportunity to experience their relationships first hand. All they usually ask for is love, respect and unrestrained opportunities; they just don’t want to be seen as an afterthought. They do not despise compromise and they always acknowledge that they can compromise until their demands become the norm.

While they may be opinionated, which of course is needed if your voice must be heard, they are usually the ones who go extra miles to make sacrifices and reach some compromise as long as it doesn’t question their peace. It is not something you need to ask for, it just who they are.

This is just a part of the power of the woman. Women are the institution of sacrifice even in marriage and when we understand this as men, we make it even easier for them by loving them and playing our own part.

Let me know your thoughts.