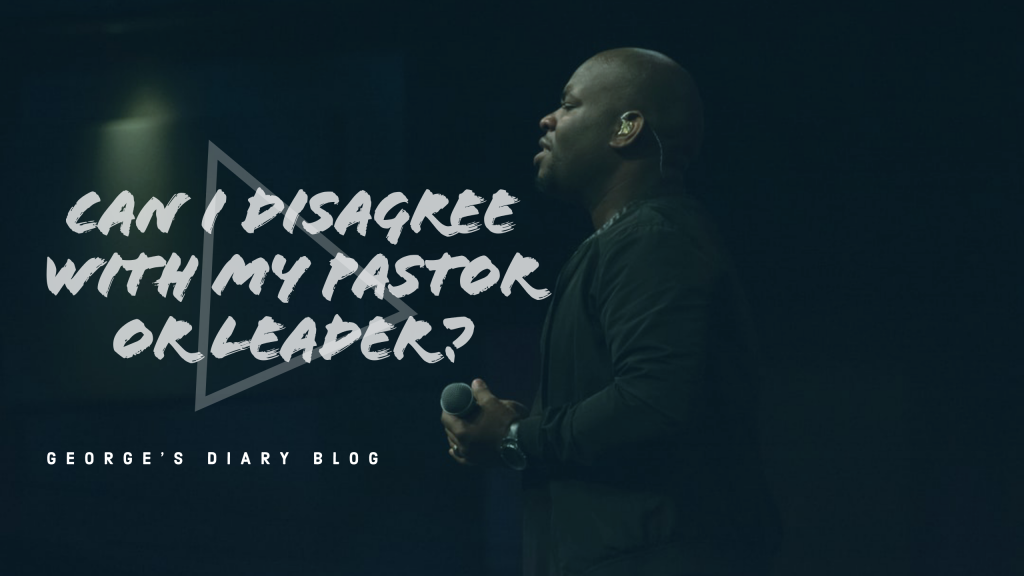 Short answer: Yes! There is how…

Some time ago, a Pastor I love and respect so much like a Father once said something. It was at odds with my convictions which I have always made public. He opposed it not just with a release but also among brethren in a gathering. It didn’t affect my relationship with him, he didn’t disagree with me to hurt me, he did because he has a working mind!

Well, days later, he called me and said “do you know that while I was studying and praying, I got more clarity on that subject. You were right after all.”

Disagreement is not disrespect.

It didn’t change how much I respect and listen to him. I remained under his tutelage because his experience and character alone was something worthy of learning. I wasn’t under him to be mind-controlled but to be taught. Students have the right to question their teachers. Only God is all-knowing.

I think it is unhealthy to always assume people are insulting or being disrespectful when they don’t agree with an influential person. It is also wrong to think someone is evil simply because he questioned a “big man’s” opinion.

It takes a working mind to ask questions and so many organisations today are results of men’s questions. Taking in everything hook-line-sinker is a quality display of inability to discern and use our God-given brain. If God didn’t want you to think and ask questions, he wouldn’t have given you a brain. We are humans, we must differ at some point.

One person thinks there are whites and blacks but I think there are just humans and nothing as such like blacks or whites. I believe we are all victims to natural modifications and designs but same race! In a family, it is possible to see a fair and a dark child from same parents. But then, as much as I don’t believe in blacks or whites but humans, does that mean I am evil for being different? You believe a wife should be submissive to her husband and I believe the couples should submit to each other, does that make me evil?

Many times, it is easy for people to term you evil simply because you questioned what they have already held on for so long or what their role models or mentors have told them. We live in an age where you are seen as a rebel for saying “I disagree”. I disagree with my father in certain things, I disagree with my mother in certain things but they are still my parents and I respect them, love them and admire them so much!

You are human as much as your Pastor or leader is. Therefore, when you find yourself not agreeing with them, always understand that it is natural. When people claim they haven’t disagreed with their Pastor or leaders at one time, they are living in pretence.

Asking questions indicates you have a working mind

Non-essentials are not enough to blow off

For example, I believe in the basic “feminist” ideology but my Pastor will simply tell you “feminism is demonic”. I have my interpretation of feminism and so does he. Do I have to throw away my convictions because it doesn’t go well with my Pastor? No! But I don’t have to sound disrespectful and offensive as I stand on my convictions. He may be right in what he doesn’t love about the “feminism of his understanding” and I may be right with what I love about the “feminism of my understanding”.

I have people under my tutelage too and I know certain areas where we differ in ideologies. We are humans who have choices and we differ in the ways we interpret certain things. The things we usually disagree on are non-essentials and shouldn’t make us blow off!

Disagreement can be results of discernment.

How are you able to discern when you are being wrongly taught or when you can’t study the word of God independently beyond anyone’s interpretations? Sometimes, I am scared to say certain things because I fear how people will understand it.

If a “big man of God” says for example “fasting and prayer is one way to attract God” and I disagree, it doesn’t suggest hatred for the Pastor, it doesn’t suggest antagonism towards the Pastor. It will be unhealthy when we run a pyramid church, a Church that revolves around one man’s perception. The church is about God and us and not about God, our Pastor’s Pastor, our Pastor, our Pastor’s executives, our cell leaders and then us… No, it flows straight from God to us and nothing less. There are benefits in disagreement

Being able to respect people’s perspectives and also disagree healthily has helped me in working with believers who don’t even believe what I believe. The problem sometimes is that those who disagree communicate and vent their disagreement in an unhealthy way with words coated in arrogance and disrespect.

However, disagreeing on its means “I have a mind that works”. To be in an assembly where I don’t wholly agree with everything means that I understand that God has planted me there for a reason. Some slight disagreements are good after all, it encourages you to dig deeper into the word of God. As you try harder to see a place to agree, you see yourself digging deeper to know what the word says. If you are standing on the right ground, it will further deepen your convictions and if you’ve been standing on a lie, it will further break the shackles of ignorance.

I need to say this again. There is one way to disagree with not just your Pastor but other persons; it is to be done in humility, respect and love. You don’t puff your shoulders or use words that are lacking in grace. You don’t even need to publish it everywhere that you don’t agree with your Pastor when it isn’t a very strong matter except in the case that it leads people astray.

We may not be eye-to-eye in theology, but we can be arm-to-arm in our walk as believers. If disagreement makes us feel bitter and leaves us fighting rather than seeking more understanding in love, then we are dealing with a bigger problem that isn’t disagreement. The early church had a lot of disagreements too but it only helped in shaping their understanding and in the spread of Christianity. When we disagree, it should be a brotherly exchange of perspectives and not a heated argument as the case always is.

It is important to know that you aren’t weird because you don’t agree with your Pastor or leader in everything.

It is okay not to agree with your pastor on everything, most of our disagreements are on things that aren’t so essential. Despite all, we can still walk in love as brothers because love conquers all differences. And when you disagree, you always may not need to go all out about it.

Disagreement should not breed disloyalty

Lastly, remember David had a major disagreement with Saul and in fact, it came with a divine backing on David’s side that it would still seem justified if David had gone all out about it. But David chose to still respect and submit to Saul. Sometimes, God could still use them directly or indirectly to teach us certain things and make us stronger. Only leave quietly when it seems submission is now becoming a problem for you because of this disagreement.

The beauty of Christianity is that every single man is encouraged and equipped with the ability to test every teaching regardless of who it comes from.