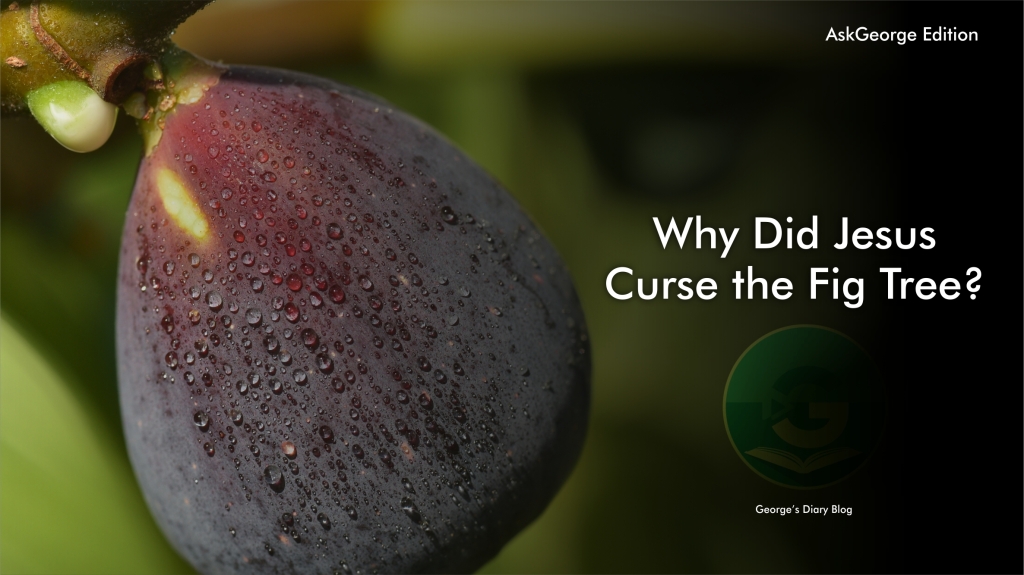 Please, I’ll appreciate it if you can squeeze out time to attend to my question. I was doing a little study this night about the supposedly “BARREN” fig tree Jesus cursed in Matthew 21:19; everything seemed fine until I read the same account in Mark 11:13 and I became confused. My question is: “Why did Jesus curse the fig tree?” Matthew’s account gave us an impression of a fig tree that is BARREN but Mark’s account said it’s not yet the season for figs, and as such, the fig tree is not to blame. Sir, how do we reconcile the two accounts?

We know that the Bible spoke so much with symbolic terms which makes it a bit difficult when we don’t understand what those symbols are pointing at. The fig tree that Jesus cursed was prophetic as the tree represents Israel. The Bible says that the fig tree was looking very green, healthy and promising but it still had no fruit. To understand what fruit signifies, we may need to look at what Jesus said in Matthew 7:16

“You can identify them by their fruit, that is, by the way they act. Can you pick grapes from thornbushes or figs from thistles?”

Somewhere else in John 15:2, Jesus said

“He cuts off every branch of mine that doesn’t produce fruit, and he prunes the branches that do bear fruit so they will produce even more.”

Fruits here signifies character and the fig tree according to the story looked very fruitful from afar but had no fruit in it. Reading Mathew and Mark’s account of this story together gives us a better perspective. This fig tree represented the nation of Israel at that time, it represented their self-righteousness and religiosity which truly isn’t yielding the desired fruit God expected of a man. The Bible says in Jeremiah 8:13

“…there will be no grapes on the vine, nor figs on the tree, and even the leaf will wither…”

Just like the religious leaders of those days loved to showcase their allegiance to the law in their ambiguous and pretentious “make-believe” ways, they make noise about their tithing and keeping of the Sabbath but Jesus said they ignored the main thing. Let’s read:

“What sorrow awaits you teachers of religious law and you Pharisees. Hypocrites! For you are careful to tithe even the tiniest income from your herb gardens, but you ignore the more important aspects of the law—justice, mercy, and faith. You should tithe, yes, but do not neglect the more important things.” – Matthew 23:23

We must also note that the story of the fig tree happened within the same time Jesus went to cleanse the temple. Matthew and Mark account may seem to contradict each other because the account of Matthew has it that the fig tree was barren while Mark’s account had it that it was not yet the season for figs. Before we explain this, you must understand that the story of the fig tree was intentionally acted out by Jesus as a prophetic move. It didn’t happen as a coincidence, Jesus intentionally went to the fig tree, He acted it out because of what it represents.

When you do a close study on fig trees, they produce unripe fruits even before the leaves starts becoming very green. Whether in season or out of season, a fig tree full of green leaves is expected to have some fruits on it. That is why Matthew’s account termed it “barren” because it had no fruits even when there were green leaves on it. However, the significance of what happened was that Jesus came looking for fruit in a good looking, healthy tree and couldn’t see any. This represents God coming to look for fruits in His people who are part of the branches that Jesus talked about but couldn’t find any.

By condemning the fig tree, Jesus condemned self-righteousness of Israel with which no one can ever produce the desired fruit. In Romans 9:11-24, Paul also used the analogy of branches of a tree to describe how we have been saved by Grace while those who are bent on the law are hardened. By cursing the fig tree, Jesus cursed self-righteousness which the Bible calls a form of godliness and display of religion without power. Let’s see how the Bible puts it in 2 Timothy 3:5

“They will act religious, but they will reject the power that could make them godly. Stay away from people like that!“

This was exactly the case of religious Israel at that time. Another way to put it is that Jesus indicated the fate of those whose source is the law which cannot truly sustain them. Paul referred to the law as the ministry of death and this was the case of the fig tree which Jesus cursed and it died!

It wasn’t the season for men to start bearing the kind of fruit that God expected because Jesus hadn’t died on the cross and the Holy Spirit which is God’s Spirit in us, working in us and producing Godly desires, had not yet been given. No one was born again at that time and no one was expected to bear the fruits of the Spirit! The Bible says in Galatians 5:22

“But the Holy Spirit produces this kind of fruit in our lives: love…”

However, with the self-righteousness which they portrayed at that time and with the rejection of Jesus, they were simply saying “we don’t need help! We are self-sufficient! We are producing fruits…” They claimed to be producing fruits while they were not producing the fruits God desired of them. By condemning the fig tree, Jesus was showcasing the fate of those who believe that they can be saved by the law or their righteousness.

People can put up the uniform of religion, mask themselves with several rituals and ordinances, portray themselves as perfect people but there is only one way to truly be Godly and that is to believe in Jesus and receive the Spirit of God which is God’s way of making us be like Him even in character. When we have the Spirit of God in us, we begin to bear the fruits God desires of us.

Conclusively, Jesus only acted out the fate of a spiritually blinded people who still trust their self-righteousness and efforts for salvation. They can put up a form of religiosity, they can look righteous on the outside but they are spiritually barren because they deny the power which makes us Godly.