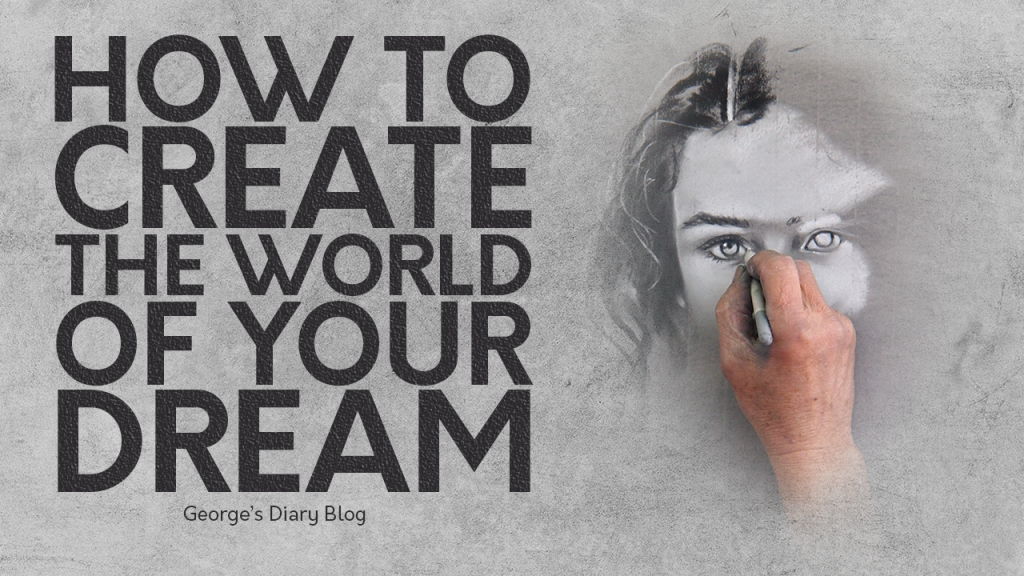 Many times, we ask questions as to what God’s plan is for the mess in the world. We see millions of people die in war, we see epidemics happen here and there and we keep asking “what is God doing about the world He created?” I think that isn’t the right question because the world was handed over to us. God gave man authority over the world and therefore we should be questioning ourselves in this manner “what am I going to do about the mess in this world?” For example, God so loved the world that He gave His only begotten son and sent Him for our salvation. However, Jesus also sent us into the world to preach the gospel, heal the sick and do so many other amazing things. God is concerned about the situations of this world but He already sent us to be the solution to these problems. It is not God’s job, it is our job.

Scratch that... Let’s get into the business of the day.

You can create the world you want. I know you have always heard that but I’d like to explain something to you. Your confessions are powerful, your thoughts are powerful but these things aren’t all you need to bring something into reality, they aren’t up to a very reasonable amount of the resources you need to create what you want. Let’s see it this way: if you can think it, you can do it but if you end up not doing it, your thoughts are a waste. Your confessions and ideas are forces that must be acted upon and until you act upon it, they remain dreams. Let’s take a look at God and see how He created the world.

God pictured the world, He thought of giving the world a form (a kind of design) and He was vocal about what was going on in his mind. As God communicated these things, He was creating them in His mind; they were becoming realities only in His mind. Each of His creations came alive even before their formation but these things were only alive in Him. They weren’t tangible yet but they were in existence in His mind.

After God finished calling these things into existence, He still had to start forming them with His own hands. It didn’t end up in His minds, it didn’t end up with His confessions and declarations, He went ahead to bring these things that already existed in His mind into physical reality for what He wanted to do with His creation. God wouldn’t have felt fulfilled if these things only ended up in His mind, He called them forth with words but He also formed them by His hands. When we look at God, we can learn of Him and become productive like Him.

You cannot evade the initial process of grasping the idea and planning it but if you only end up planning, you have done a fundamental thing but you have not done anything. The wealth you have been fantasying about may only end up in your diary if you don’t go ahead to make that money. God created man with His words as the Bible says in Genesis 1:27

“Then God said, “Let us make human beings in our image, to be like us. They will reign over the fish in the sea, the birds in the sky, the livestock, all the wild animals on the earth, and the small animals that scurry along the ground.”

But then, the man wasn’t material yet. He was existing in God but wasn’t a reality in the physical realm until God formed him with His own hands. The Bible says in Genesis 2:7

“Then the LORD God formed the man from the dust of the ground. He breathed the breath of life into the man’s nostrils, and the man became a living person.”

The man became a reality in the physical world where He is meant to function only when God worked out what He has called forth. If God had only said it, Man wouldn’t have been material but He worked it out. In this earth, nothing just happens, one way or another, it must be worked out for it to happen.

I am beginning to think that in the beginning, when the world was without shape, it was because God hadn’t formed it. How did God form the world? All the creations are what gave the world shape! God had to envision it but He also had to work it out.

It is great to think about having a happy family, it is amazing to think about having great and intelligent Children but these things will only end up in your mind when you don’t work it out. When you don’t put effort to train your children, they will never become what you envisioned for them. Your dreams, confessions and visions are only validated by the corresponding action, your action brings them alive! Jesus said in John 13:17

“Now that you know these things, God will bless you for doing them.”

The blessing attached to every dream can only be harvested when you start working it out. It is okay to grasp a vision or an idea, it is okay to make plans but it becomes a waste when you do not act on it. It is not in hearing words, confessing your dreams or even making plans that the blessing is, it is in working it out! The Bible says in a part of James 1:25

“–they will be blessed in what they do.”

You can easily create things in the mental realm by envisioning it but if you don’t put efforts and get your hands to work, trust me; they will never escape the confines of your mental world. When you draw the plan of a house, that house is already in existence, you have mastered it and it is a reality to some sort. But until you begin to build and form that idea in the physical world, they will never be tangible and only your mind can know that such a thing existed.

God thought of making man, He declared it with His mouth, He called man forth into existence but all these exercises wouldn’t have been useful if God didn’t soil His hands and form the man the way He wanted him to be. God created us in His image which also means that we were created with certain Godly capacity like calling and bringing forth things into existence. This has nothing to do with religion, any man can think something and do something about it but it will necessitate you leaving your comfort zone!

Had Steve Jobs ended up fantasizing about the Apple devices, we would not know what it is till today, only he would have been able to look back at his thoughts and say “what a beautiful plan and idea I’ve got!” But, he thought it and he worked towards it. The reason why many of us have not formed those dreams and ideas is that we are too scared to go off the comfort zone. The reason why we haven’t created that product is that we are scared if it will gain acceptance, we are scared if our ideas are valid and we are scared if our dreams are worth it.

If you can think it, you can create it and if your ideas appeal to you, it will appeal to others. You are a Spirit and your thoughts are real, the pictures you’re seeing in your mind are simply characters that exist in your mental environment but it is left for you to form these things into the physical environment. Look at how technology is evolving and things that seem impossible are being created but these things wouldn’t have become material if the inventors only ended up dreaming about it. Who would have believed that we can control devices with our voices and eyes, who would have believed from thousands of years ago that this world would be advanced to this point? Who would have believed that I can stay under the mango tree in a remote city, type with my laptop and reach the globe with my writings in a matter of seconds? How did all these things come to be? They started as fantasies and ideas, then plans were put in place and then it got created with hands!

As much as life and death are in the power of the tongue, life and death can only be authenticated by actions. A force must be acted upon for a physical result to take place. Those confessions, prayers and ideas are valid but they are not enough because they only play founding roles but you must work out the rest with your hands. The reason to dream and form ideas is to act on it, ideas become irrelevant if you won’t act on it.

The initial thing you need to create what you want is not money but you truly need material resources to give those ideas a physical form! God spoke a word, it came to be but He took time and resources to make it a reality. Nurture your dream and work on it. It may demand further studies, it may demand you committing yourself to years of learning and practice, it may demand you giving up certain things and soiling your hands but you must truly work it out!

Haven’t you thought of this before? God blessed man from the point of creation to be fruitful, He said in Genesis 1:28

“Be fruitful and multiply. Fill the earth and govern it. Reign over the fish in the sea, the birds in the sky, and all the animals that scurry along the ground.”

But same God who had already poured out His blessings of fruitfulness said in Deuteronomy 28:12 (with personal emphasis):

“The LORD will open the heavens, the storehouse of his bounty, to send rain on your land in season and to bless all THE WORKS OF YOUR HAND. You will lend to many nations but will borrow from none.”

How does that happen? Aren’t we blessed already? I will explain this. God has already blessed us with the ability to create our world with ideas and dreams but only those who make the extra effort to sit down and begin to put those things into shape with their hands can enjoy the full manifestation of fruitfulness. God didn’t create computers, God didn’t build houses, and God didn’t form or even designed cars and aeroplanes. The reason is that it is not his job to do all of these things. He made man and blessed him with His kind of creative ability and to be able to create, we should learn from God. God didn’t just say words; He worked out those words with His hands.