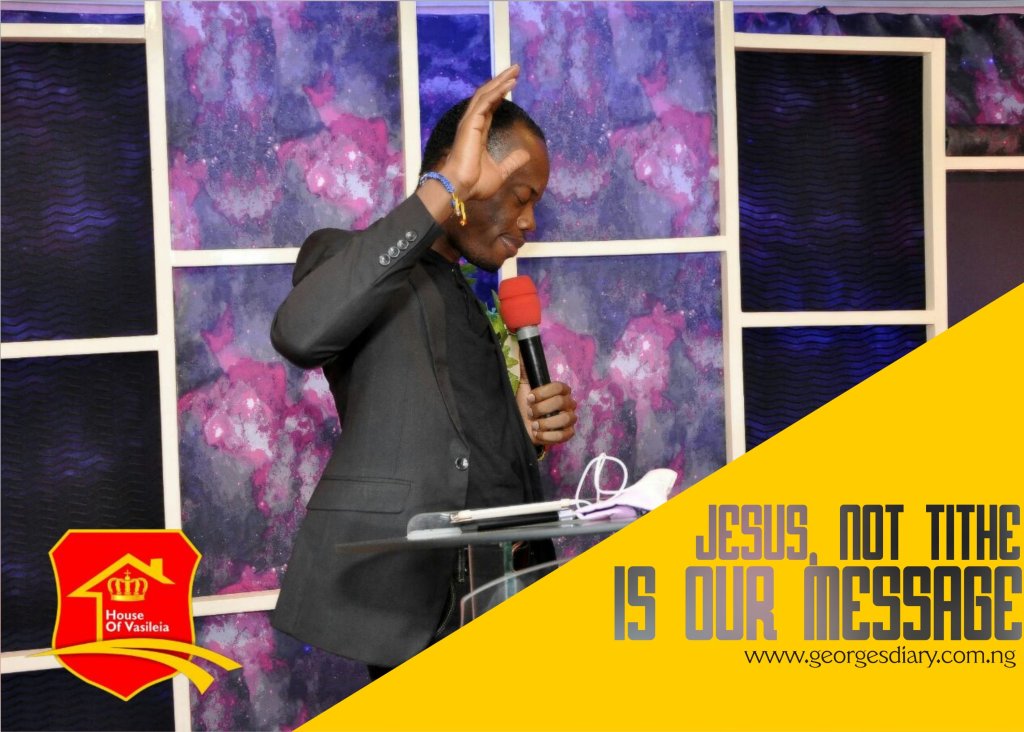 JESUS, NOT TITHE IS THE MESSAGE

“Each of you should give what you have decided in your heart to give, not reluctantly or under compulsion, for God loves a cheerful giver.” – 2 Corinthians 9:7 NIV

You see that? It is not my opinion, it is what the Holy Spirit inspired Apostle Paul to write and this is in line with the realities of the new creature. The believer decides in his heart what to give, he is not forced to do it. Now, believers give generously when they understand God’s love for them. The more they grow in the knowledge of God’s love, the more they give. I don’t think the argument of tithe is a healthy one for the Church. Tithe is little for a vast majority of people, tithe is not a generous giving! God loves cheerful givers… The people of the old paid tithe because they were forced to do so. It was relevant then because they were blind to some realities and responded by the law. Abraham gave tithe, not because he was forced, he gave tithe cheerfully and that he gave tithe doesn’t mean everyone will give tithe… It is simply an example of giving what one has decided in his heart.

Let me say it again, whether we call it tithe, stewardship or seed… Christians should be generous givers and not tithers. Every serious believer must partner and be financially committed to his or her local church but we don’t need to streamline it down to tithing. Our message is not tithe, we need to get out of that argument and start teaching the word. We need to stop defending tithe and start teaching the word. If the devil is behind the debate of tithe as some claimed, then he is doing it to distract believers from preaching Jesus to preaching tithe! Tithe has been trending for a long time and many preachers are beginning to focus on tithing rather than Jesus.

We don’t force people to give, we don’t threaten them with Malachi 3:10, God isn’t cursing anyone for not paying tithe. However, when people sit under the revelation of Jesus they will partner in love. I was in a program, after the preacher preached on the love of Jesus, I walked to the altar in joy and dropped a huge sum of money. I wasn’t paying tithe, I was responding to the love of Jesus. You can’t be responding to God’s love and you’re counting money and dividing them into ten! The New Testament has no record of people paying tithe but it has good record of people selling everything they had and submitting the money on the feet of the Apostles. I believe the early church spreaded faster because they were not concerned about tithing, tithing wasn’t there message, Jesus is the message and people were responding.

The Church needs generous and cheerful giving and not tithe. People who are blessed by a ministry will always be dedicated to financing it. The previous verse says:

Generous givers are generous receivers. Generous giving is a result of an understanding, a man who has not understood or gotten a revelation of the love of Jesus will still be giving his transport fare balance as offering and stewardship in the Church. Giving is an expression of God’s blessings but there is also blessing in giving. Generous givers are generous receivers from God… When you sow generously into the spread of the gospel, you will reap great harvest of souls and when you sow sparingly, you’ll get just little result. Maybe the reason why it seems many of our churches aren’t experiencing great harvest of souls is because they are a tithing church and not a generous giving church.

Start preaching Jesus, let people respond to His love as they are led. Do not dictate what people give, do not manipulate people into giving. It is not your business, it is God’s business. When you start peeping into their palms to see what they give, you’re making it your business.