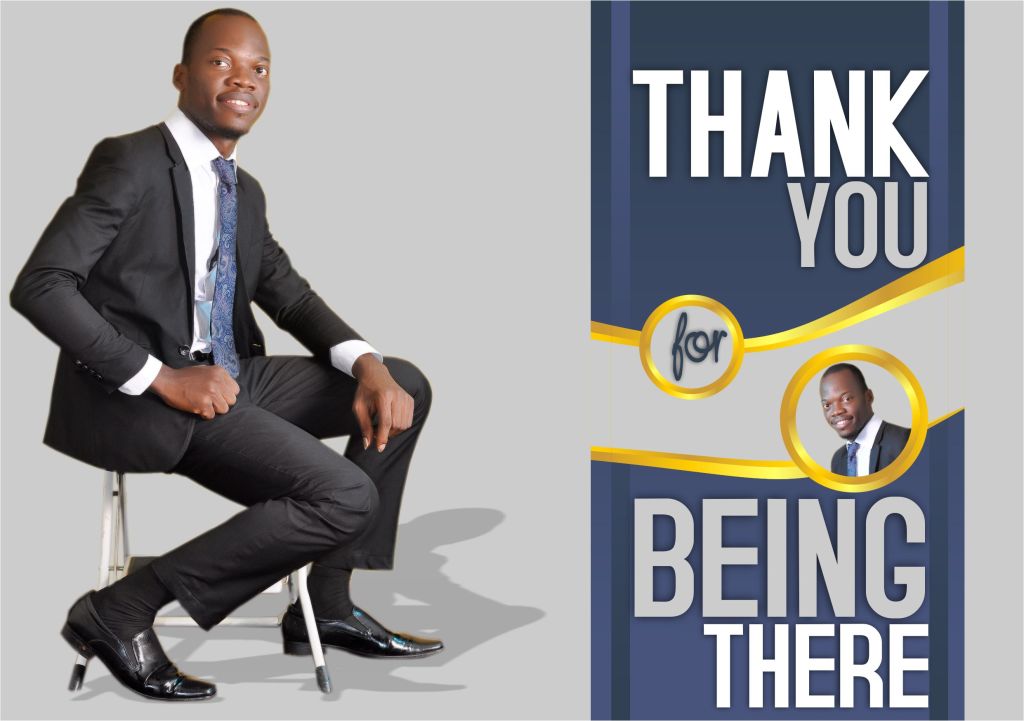 THANK YOU FOR BEING THERE

Thank you for making me a celebrity.

We all started off like everyone else, we started doing things that stole our attention, it became passion, and some called it talent. We all did different things and our passion became different making us diverse kinds of being despite the fact that we all started the same way. How do I mean? We all lived in a womb until we were mature for delivery, it generally took 9 months in the womb and no one had extra or less except for rare exceptions. We all cried, we all crawled and now we are walking… different kinds of walk though. We all defined ourselves by where we decided to walk to.

It is on this journey that we all stumbled into a space where we would still meet even when we are running on very different tracks; the entire busy world got connected through the internet. There were the social Medias and internet connections like twitter, Instagram, Facebook, YouTube and our websites!

In 2010, just like everyone who did, I ran into Facebook… At first I didn’t know what to do with it! They asked me what was on my mind and I shared! You saw it; you paid attention to it and showed me that people are still willing to listen to me even if they don’t believe everything I said. Your attentions encouraged me to keep sharing my mind and I didn’t stop. From stages to stages what I shared was getting refined just as my mind continued undergoing serious renewal, you all followed me patiently with your likes, comments, criticisms, and all other forms of communications which pointed to one thing; the fact that I was talking to people and that people are listening to me even if they don’t like me.

Because I was growing up, I couldn’t endure some disagreements, I would respond to critics and insults with very harsh word, I even blocked some and unfriended some. Some of these people were those who have patiently allowed me to occupy a space in their digital world. I would have done better but well, that was my “better” at that time. Everything had stages and those stages occurred in its time, I don’t regret passing through that stage even at this time. You all made the internet my secondary stage; you gave me audience and even encouraged me to explore other areas of internet thereby making me reach larger audience through my blogs, audio and visual channels. Had it been I was ignored when I bumped into the social media world, I would have run out immediately depending solely on paper works that may not get to much people.

I started making some videos for my channels and you started watching, giving me reasons to make more. I launched George’s Diary Application and you downloaded it because you trusted what I would offer… You showed me that I matter to you. Some of you confided in me and shared your most treasured secrets even when you have never met me before, you trusted me to be instrumental to your marriage, career and spiritual lives with counsels and prayers.

There is this feeling I have when many of you desire to meet me just because I have added to your lives in the cause of sharing my mind. I feel like a celebrity when some of you run into me in the public and say you follow me on my various internet connections, you listened to my songs and read my books. I feel good when you get excited just for meeting me and I really feel like a star when you accord me great respect just because my connections and existence has been a blessing to you.

I have sat down to calculate how far we have gone in this, comparing both sides of the coin, my digital and physical world, I have seen that I have been able to come this far just because someone believes in me, someone wants to see me better and someone wants to read my thoughts and listen to me.

I may not have faithfully responded to every chats, read every post, accept every friendship, honor every invitation, like every comment or even comment on every post but I deeply appreciate everyone who has made it an interesting adventure for me. I know I have not reached the peak, I know I will not boast of fat account balance at this moment, I know I have not done 10% of what I really want to do, I know I cannot boast of hosting thousands of people in an event but you all have made me feel on top of the world by just paying attention to me whether with your encouragements and critics.

I want to take this time out and say thank you for believing in me… Some few persons have even supported me financially just because my teachings touched their lives. You all made me a celebrity by celebrating me. I am getting better every day and I will keep getting better. For your likes, comments, follows, messages, encouragements and criticisms, I want to say a big thank you! God has blessed you with me and God is blessing me with you!

I will be on a very brief break from social media; I will still be available to very important messages. Let’s do it better next time!