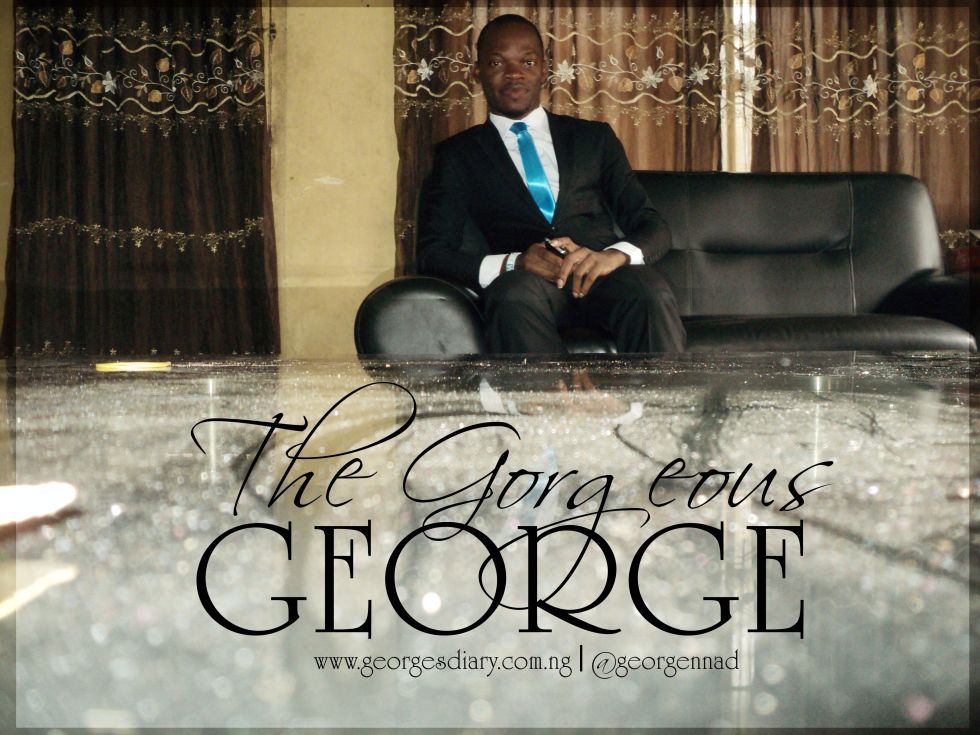 At a very younger age, it was highly illegal to call me ‘George’; in fact it was one of the highest forms of annoyance! I wanted a change of name because to me it was a meaningless name or maybe I was meant to see it as meaningless.

My hatred for ‘George’ started when my siblings started calling me ‘Ugwu George’ or ‘George Ogodo’. I wouldn’t start explaining what those things mean anyway. But as I was struggling with that; I also learnt that George means a farmer! At that time, we were meant to believe that farmers are poor people; the farmers we saw on the media were the poorest people on the planet earth. I wouldn’t believe my parents gave birth to me and of all sweet English names all they resorted to calling me was George. I wondered where they got that name from and I started planning of seeing a way to change my name.

One Saturday morning, I had become very furious with it and following my encounter where a hand tapped me followed by a voice that instructed me to start preaching the gospel; I decided to name myself Samuel. I did that because I felt I had the same experience with Samuel, I felt Samuel best defined who I am and I started changing the names on my properties to “Onyedika Samuel” instead of “George” and I began to publish it into the minds of people that my name was Samuel. All efforts to get me convinced in accepting ‘George’ failed and my parents even became so worried about my rejection of a name they felt was soothing for me.

We had a family meeting, my Dad asked me to the hearing of everyone why I disliked the English name they gave to me and I said “George means a farmer and I am not a farmer, I can’t be a farmer. I also hear people say ‘ugwu George’ when they are measuring or talking about waist wrapper materials. I am not comfortable with it” He smiled and asked again “now, what made you think Samuel is the right name for you?” I responded “Samuel encountered God from childhood and became a Prophet and a Priest of God. I consider myself similar to him” He nod and promised me to ensure that I have a legal change of name. Even my signature was ‘Samuel’ and had remained that way till date.

As I grew up, I had the independence of studying and making researches. My mum made us read books and by the time I was in primary four, I have already started reading books meant for secondary schools. I have started reading Pacesetters publications, I have read ‘This is Lagos’ and so many other similar books and I had even started reading big Igbo books after which we must always summarize the books we read in a writing and submit to my mum for inspection. She would scold us when we didn’t do it well and ask us to do it again. Because of that, everyone in our family started writing, reading and understanding things beyond the level of our mates. We were not allowed to make friends or associate with people outside therefore we spent all the free times of our childhood inside the house, none of them was spent outside. We could only stand at the balcony to watch children play and we may decide to play in our own sitting room. The advantage of it was that it especially gave me the opportunity to start exploring certain parts of me. I started writing just to keep myself busy and never get lonely; I also started researching just to make sure I write relevant things. Then, I started developing so well.

After some years, I had discovered that ‘George’ doesn’t just mean a farmer but a rich farmer and I started thinking again. I have understood that farming isn’t just digging the ground and putting some seeds in there and I discovered that farming involves whole lots of things! George didn’t just mean a farmer but a rich one at that. I still wanted not to have a soft spot for the name until the words of Jesus about a farmer who plants seeds came to my mind. I have been in the business of planting spiritual seeds; I have been planting the seed of words into people’s heart by preaching the gospel. Right there and then, I cherished the name ‘George’, I wrote it down on a paper and looked at it, it was so beautiful and for the first time, I was so proud of it. Anywhere I saw ‘George’; I could pause, look at it, smile and continue. I gradually started convincing people that my name is George and not Samuel. When my siblings come to make mockery of ‘George’ the way they used to do, I laugh and tell them “I know my name and I know what it stands for. I am George” nothing could get at me again because something changed.

What changed? It was my perspective.

When you start seeing differently, your may discover that people’s criticism and discouragements may not be able to convince you against what you want to do. When your perspective is changed, you may not need to change from that ‘driving businesses’, you may just need to spice it up and make a difference. I went to a certain transport company to board a bus to Lagos from Onitsha and I learnt their drivers are not called ‘drivers’ but ‘captain’ or ‘pilot’. Many of their drivers are university graduates who communicate well and still remain happy while driving! Why? They have a change of perspective on what being a driver is. Perhaps, you don’t need to change that business of ‘snacks’, you just have to be creative enough to make a brand out of it. Some of these things we call ‘kpekere’ in Nigeria tastes much better than labeled plantain chips! But what makes plantain-chips better and more expensive is that someone who is into ‘kpekere business’ had a change of perspective!

From my little age, I have been seeing people produce and sell chin-chin. It was not treasured by many people because almost all the chin-chin in the market had the same texture when it comes to the taste bud, most people would choose other snacks to chin-chin until some people had a change of perspective, they started making the same chin-chin but in a better way, with better packs and more hygienic outlook. Theirs stood out and they knocked down other offerings of chin-chin… Why? It wasn’t because of change of business but change of perspective. I could go on and on to give instances of people who didn’t change their names or business but only changed their perspective. I know so many new photo studios in Onitsha that knocked some photographers out of the competition, they only had a change of perspective and improved but I also know a photographer who left photography and started riding ‘Keke’ because he felt there was no future for photography, today photographers are becoming richer and better!

Let me say again, sometimes it is not a change of name that you need but a change of perspective. My name is George; I love my name because George is gorgeous.