When we become Christians, it seems there is always a fight in our conscience as to if we are really saved. We see ourselves doing some things we thought we were saved from! As a result of our legalist-oriented minds, we begin to doubt if we are really saved and we even begin to doubt the authenticity of Grace! As a result, we go back to struggles, trying to please God with our vain works.
Colossians 3
Our Place in Christ (Vs. 1-4): We have been raised with Christ to a new life. We must also note here that we have been raised even before we were instructed to aim at things above. So this simply means we have been permitted and programmed to reach at the higher-level if we want. It is possible that a Christian who in actual sense has been raised with Christ will end up below. When we seek for something, we will walk and work towards what we seek. Watch it! We have been raised with Christ but then we must aim at where Christ is! We were not saved because we aimed to be raised; we are aiming higher because we have been saved. That is a privilege unbelievers do not have. Do not preach to unbelievers about aiming or seeking higher when they have not believed. Believing comes first. It is absolutely correct to say it this way: salvation does not come as a result of any action or work. It comes wholesomely immediately we believe. Believing is accepting and that is why God puts it that way. He doesn’t enforce his will on people; he gives people the chance to make their choices. So it must be noted that every believer is saved, it doesn’t matter if they sinned or not. The issue of salvation should not be questioned when a Christian exhibit weakness, unless the believer stopped believing. Believing is enough to save you but it may not be enough to put off the old cloth. You are to do that yourself! Be rest assured that even as you are struggling to get rid of earthly nature, you are still saved. Your struggle is no longer with sin! It is sin that is struggling with you.

Putting Of the Old Cloth (Characters) (Vs. 5-9): We must also still remember that Paul was still talking to believers. A sinner can actually be saved without him necessarily changing at that instant. Sinners are not saved because they left their sins; they rather leave their sins because they have been saved. While still speaking to people who are saved already, Paul is saying something strange; “put to death, therefore, whatever belongs to your earthly nature…”! Yes, they were saved even while displaying their weakness. Salvation brings the ability to kill sin; you don’t kill sin to get saved. Putting to death here means “deprive of power”. You don’t see Paul asking unbelievers to “put to death…” because they lack the power. You receive power the moment you receive Jesus, John 1:12. Thanks to God for John 1:12, power is given to them that received him, even to them that believed. So the power to become means something deeper! God doesn’t make you a son by just making you a son. He gives you the power and you make yourself a son! One of the processes of becoming a son is “depriving the earthly nature of its power over you”, you might struggle with it but it is worth it. Someone might be asking, “Why do I need to stop sin since I have been saved?” Vs. 6 explain it very well. It says, “It is on the account of sins that the anger of God is coming on those who “refuse” to align with God”. While putting of the earthly nature, you remain saved but if you blatantly refused to put it off as disobedience to God’s will God’s wrath is ever coming. You must get rid of everything you were while a sinner and allow God to fill you up with his own godliness! You can actually allow God to fill you when you continue to study his word and as you study you open up your heart to always accept the rhema! Let me explain this with a better approach; when you purchase a book and wrap the back with your old news paper, it doesn’t mean the book is an old news paper but what people see is the old news paper and they may never believe it is a new book! The same way, you have become a new man when you became born-again but perhaps you are still putting on that old cloth! God wants you to put of the cloth of your old nature! 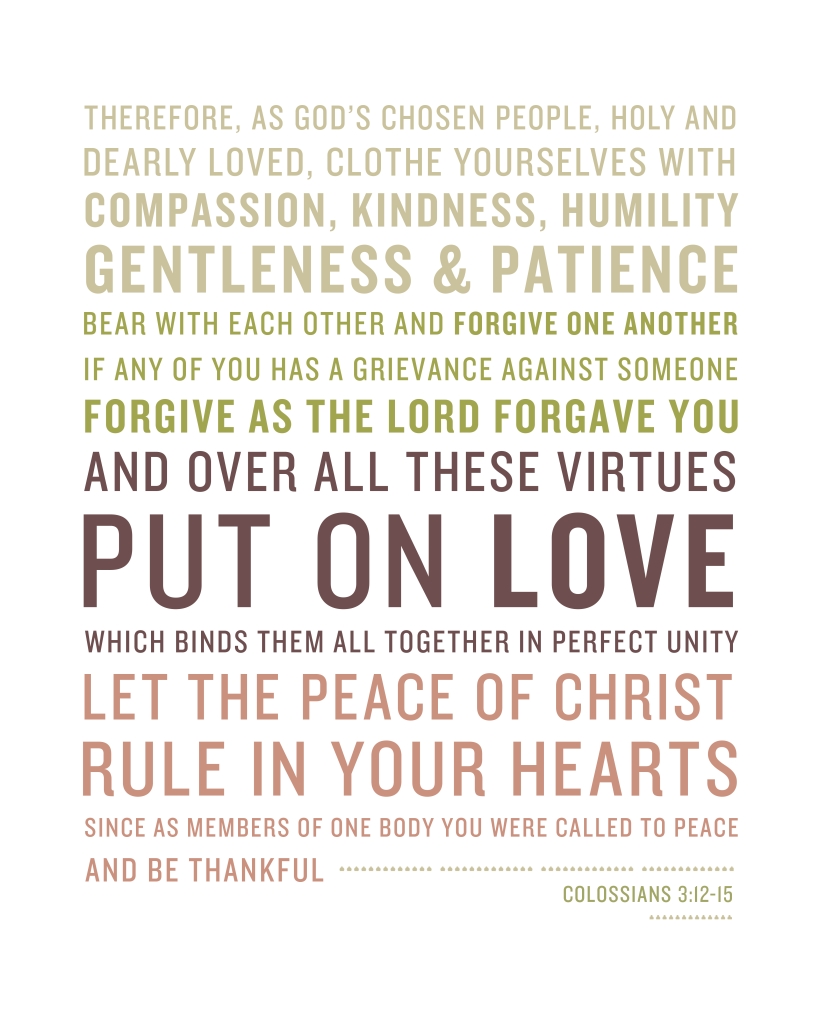 Putting on a New Cloth (Character) (Vs. 10-13): When a lady puts on a very attractive outfit, it simply means her intention is to attract people who will admire her. When she puts on a sexy (indecent) outfit, it needs not to be debated that she is openly advertising her availability for sex and in that context she may be called a “whore, prostitute or slut” even when she may not be one. That is exactly the same manner of thing Paul is addressing here. God wants people to see his glory in you and that can only happen when you put on the God-Character. When you act like a sinner, you’ll be called a sinner. The new clothing for us needs renewal (vs. 1), renewal is a continuous process and we can actually be renewed in the knowledge after the image of Him who created the new clothing (the new self). This new clothing is available for everyone including the Jew, Greek, Muslim, Cultists or gentiles who have come to Christ!
I wanted briefly say something on this portion of the scripture Col 3:12
“Therefore, as God’s chosen people, holy and dearly loved, clothe yourselves with compassion, kindness, humility, gentleness and patience.”
It is not God’s duty to make you put on good behaviours! It is your duty. Now watch it, God choose you as you were, even when you lacked the behaviours he choose you! Now that you have been chosen, it is not God’s duty to put those behaviours on you. The demons decide what the people they possess do but God gives the people He possesses chance to make their choice. The choice you make can actually affect how you relate to God. But then you are to cloth yourself with Godly characters! Those characters does not make you holy, it doesn’t even make God to choose you. He already chose you and called you holy before asking you to put on Godly characters! Let’s see how Amplified Bible puts it:
“…by putting on behaviour marked by tender hearted, pity and mercy, kind feeling, a lowly opinion of yourselves, gentle ways, [and] patience [which is tireless and long-suffering, and has the power to endure whatever comes, with good temper].”
You see, you are the one to put these qualities on. God gives you the grace to gradually put them on, he doesn’t condemn you the instant you fail to properly put them on. When you refuse to put on Godly characters, you will end up destroying your faith. When your faith is destroyed you will stop believing, and when you stop believing, you are no longer saved.

The New Character (Vs. 14-25): It may be really hard to begin to mention every character one after the other. There are many of them not even mentioned in Paul’s writings but Paul did make one thing very clear. “…put on love, which binds them all together in perfect unity”. Love is like a container and it perfectly contains all the godly characters. When you put on love, you have put on all of the godly-character! It is just like putting on a gown. A gown is made up of buttons, zips and other materials, when you put on a gown, you are already putting on the zips and buttons and every other material used in making the gown. In vs. 15, Paul talked about “peace of Christ”, this is different from every other peace. It comes only from Christ and it is a part and parcel of true-love which also comes from Christ. Paul goes further to encourage the dwelling of the message of Christ in our hearts. When the word of God is in our heart, it renews the new self or character we have been programmed to walk and work in.
We don’t do these things to get saved! We do them because we are saved. That is the logic in vs. 17 where Paul is asking us to do it in the name of Jesus or in dependence upon him because we cannot do it on our own! Again we must give thanks to God. Why? Because the ability comes from him! Remember what we read in John 1:12, the power to “become” comes from God. In submission, love, obedience and other virtues mentioned by Paul, God ought to be appreciated! We don’t act that way because we are strong but because our dependency on Christ is supplying us with that wonderful ability! In all we do, we must know we are doing it for God! Not out of our fear for him but out of our love for him.